An overview of each department on most film, television, and digital sets (especially the bare bones ones!)

– Actors – These are the people on your screen. I encourage you to go SAG and to pay these people. Generally the actors are the first to go unpaid and that gets so old and so unfair after a while. If you’re a shoestring, at least give them gas money.

You must feed the actors. They get hangry. 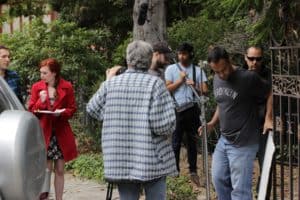 – Producers – On a TV show, these are also your writers. On films, they tend to be the money people. On a digital series, they’re everything. Both. All of it. They are probably doing eight other jobs as well on your super low budget material. It’s tempting to ask a producer all your questions, but please do not. They’re the top of the food chain; only go to them if you have already checked with other departments.

– Director – The dude in charge of the shot! He’s the one we think of as holding his hands in a little viewfinder box. He’s the one with the baseball hat and the chair. Directors are in charge of ALL the different departments and are responsible for the integrity of the entire piece. I personally hate it when directors go on about MY VISION, but at the end of the day, the piece you get is, really, a lot about his or her vision.

– Wardrobe – In charge of the costumes for the actors. They tend to work fairly closely with hair & make up and have the same kind of time crunch from the AD. Hire someone good with a thread and needle and with a creative eye!

– Art Department/Props – They make your world. They’re in charge of dressing the set and supplying all the STUFF that populates it. Art has a great eye for what the camera will pick up and dresses for it; they want to make sure the frame isn’t just actors standing by a wall.

– DP (aka, cinematographer) – He or she works very closely with the director to create “the perfect shot”. They agree on the look and tone of the movie and the DP directs his department to light and otherwise fill the environment to fit the tone of the piece. The director and DP also create a color palate, a shot list, and are basically in charge of everything visual.

– Lighting – they’re in charge of moving lights around! To put it very simply. They work with the DP to create the right mood for the moment.

– Sound – Do you want to hear the words your (paid?!) actors are saying? Hire a sound mixer for the day. He or she may or may not have equipment, but budget for it. You might need to rent microphones or other bits and bobs for sound.

– 1st AD / Production Assistants (PA)  – The first AD is in charge of keeping everyone on schedule, which is one of the toughest jobs on set. They have to be upbeat and kind enough to make people love them while they’re cracking a whip. That’s hard. That’s a skill. Bless you if you are an AD. PAs work under the 1st AD and run around like crazy people making sure everything is where it needs to be; they are also wonderful.

– Scripty – In charge of the script! Actor goes up on a line? Scripty’s on book to tell him what it is! Actor changes a line? Scripty says so or makes a note if the director doesn’t mind.

– Crafty – THE FOOD. Be nice to crafty. They feed you!

Next month (June!) I’ll be sending out an even MORE in depth break down of a lot of the roles on set by sharing how I break my budgets. But it’s for Patrons only! If you’d like to see that, make sure you join the community here at katehackett.com/patronage!

This site uses Akismet to reduce spam. Learn how your comment data is processed.

Listen, when I say "per my last email", I WANT you to know you're an idiot who didn't read.

I am still living that staff writer life BUT if you are a WA/SC who is also a single woman (ie not supported by a partner) and is scared of what a strike would mean for you… my DMs are open and I will buy you a coffee where we can bitch/strategize/get through this ❤️ https://twitter.com/clairekiechel/status/1440193844029526023